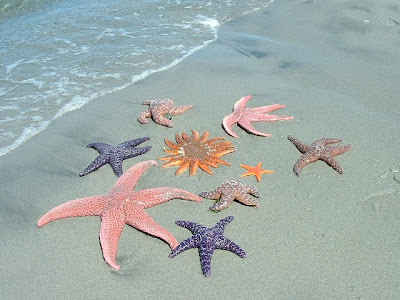 Once upon a time there was a wise man who used to go to the ocean to do his writing. He had a habit of walking the beach before he began his work. One day he was walking along the shore and as he looked down the beach, he saw a human figure moving like a dancer. He smiled to himself to think of someone who would dance to the day. So he began to walk faster to catch up. As he got closer, he saw that it was a young man and the young man wasn't dancing but instead he was reaching down to the shore, picking up something and very gently throwing it into the ocean. As he got closer he called out, "Good morning! What are you doing?" The young man paused, looked up and replied, "Throwing starfish into the ocean". "I suppose I should have asked, why are you throwing starfish into the ocean?" "The sun is up, and the tide is going out. And if I don't throw them in they'll die." "But, young man don't you realize that there are miles and miles of beach, and starfish all along it. You can't possibly make a difference!"
The young man listened politely. Then bent down, picked another starfish and threw it into the sea, past the breaking waves and said, "It made a difference for that one."
Posted by English Rider at 2:30 PM 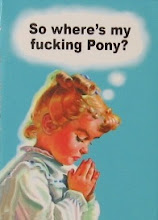 -Selective memory is but the first step on the path to magical thinking.
-Not all Baggage comes with wheels.
-When your hero is a horse you are less likely to be disappointed than were he a human.

-Unfortunately, great wealth does not always equate with class.
-A dick, surrounded by puppies, remains a dick.
-What better antidote to evil than kittens?
-Any time you have something heavy, ready to drop, your cat will sit right below and look up at you.